The First "SPAMMER" On The Internet 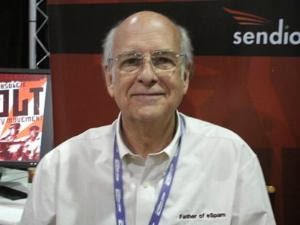 His name is Gary Thuerk, Marketing Manager from Digital Equipment Corporation (DEC). DEC is a computer company in USA. On 3 May 1978, Gary Thuerk wanted to spread the news regarding a new computer product from his company in Los Angeles and San Mateo, California. And, this is where the story begin.

By borrowing Carl Gartley's email account, he sent the first SPAM in computer network to some universities and government agency. At that time, the computer network was known as ARPAnet (the "ancestor" of internet). There were thousand of people connected through the network and majority of them are computer scientist. Gary Thuerk was going to send invitations to 400 members of ARPAnet which located in USA West Coast Area.
According the procedure at that time, he was supposed to send the emails one by one. But, he decided to send only ONE email to those 400 members.

His act annoyed the users especially the scientist communities. Luckily, some of the "victims" bought the product. According to Computer World on 6 May 2011, the total sales because of that SPAM up US$13-14 million.
Because of his act, Gary Thuerk received an award from Guinness World Records as "The Father Of Spam".

At the time when he did it, he didn't know that it was wrong. But, his act of spamming changes the computer world, especially business. According to the data from Symantec, 80% of email nowadays are SPAM.
Regardless what happened at that time, Gary Thuerk said that what happened about SPAM was not his fault. He even said that "You can't blame on Wright Brothers (Aircraft Inventor) for all of the aircraft accidents that had happened.".